The Twitterverse is Not Perverse 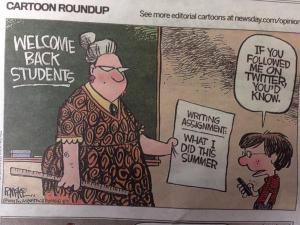 I’m not sure where this was originally published, but here’s where I found it: https://pbs.twimg.com/media/BvVVZQlIMAAB5ZG.jpg

I’m relatively new to Twitter. I joined about a year and a half ago when I finally upgraded from my old-school Nokia to an iPhone 4. It seemed like an easy way to keep track of all the random topics I follow on various parts of the web, but I quit using Twitter pretty quickly because I found that there was a lot of useless junk coming my way, too. Essentially, the junk overwhelmed the worthwhile links.

But then I enrolled in an Educational Technology Leadership course over the summer holiday, and I ‘found the happy’ with Twitter. Actually, I more than found the happy. I learned a whole new way of interacting with Twitter so that I get exactly what I need from what I now think is a great form of social media.

The trick was to stop following so many others and start using TweetDeck to create lists that filter tweets by their #hashtags. I carefully chose hashtags which routinely appear in Tweets about subjects I follow. I don’t control what shows up, so my news isn’t as biased as it would be if I only read the New York Times or only consulted the Wall Street Journal. The Twitter algorithms create a steady stream of information from a wide variety of sources and sorted by topic, which means I can now keep up with those subjects I’m most interested in: science news, education news, updates on technology in education, world news, and music. Here’s a screenshot of my information intake for a typical morning: 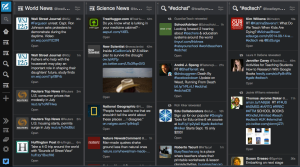 My TweetDeck homepage on Mozilla Firefox.

If you’d like to learn how to do this to enhance your learning at school, just stop by during one of my science help sessions, and I’ll help you get set up!

One response to “The Twitterverse is Not Perverse”