Kilimanjaro is probably the most famous landmark in Tanzania, and possibly in all of Africa. Despite living in Tanzania since 2008, I’ve never climbed Kili. But I have climbed its lesser-known neighbor, the 4,652-m high Mount Meru.

Like Kilimanjaro, Mt Meru is a volcanic mountain. Unlike Kili, Meru has erupted within recorded human history, with its most recent eruption in 1910. At one point in the distant past, Meru is believed to have been taller than Kilimanjaro, 70 km to the east, but around 8,000 years ago, it experienced a massive eruption, which blew off most of the eastern side of the mountain, creating a steep face all the way to the summit. You can sit atop Socialist Peak and literally look 1,000 meters straight down at Meru’s cinder cone. It’s a vertiginous experience for sure! 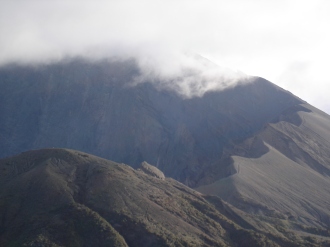 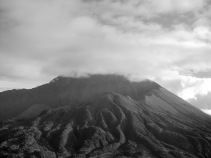 The climb takes about 4 days – 3 days up and 1 day down – through a wide range of habitats, including dense tropical montane forest, fynbos, and nearly bare volcanic rock. Summit day is brutal, with a 1am wakeup and departure, scrambling over steep rock faces in the pitch black of night, and a return to camp just before sunset, 17 hours later. But it’s also spectacular: the sun rises directly over Kilimanjaro, and parts of the route are along a knife-edge trail clinging under the vertical walls of the upper crater.

The return hike to base camp is worth the journey in itself. It skirts the base of the vertical eastern face of the mountain, ducking under trees hung with long beards of Spanish moss, and when the fog rolls in, it feels like a stroll through Tolkein’s Middle Earth. Near the bottom of the trail, the track passes through the trunk of a massive fig tree, an opening large enough to drive a Land Rover through.

If you find yourself in Tanzania, take a break from the well-traveled circuit of northern safari parks, Kilimanjaro’s “Coca-Cola route”, and the white sandy beaches of Zanzibar to climb Mount Meru. I’ve climbed Meru twice, and it remains at or near the top of my experiences in this amazing country.